SCRA compliance is not optional for collection agencies

The Servicemembers Civil Relief Act has added an additional layer of risk associated with tracking debts of active service members. Attorney General Eric Holder has made it clear that the Department of Justice and the newly formed Office of Consumer Financial Protection will be actively involved in enforcing the rules. “Each day, our brave men and women in uniform make tremendous sacrifices to protect the American people from a variety of global threats — and my colleagues and I are determined to ensure they have our strongest support here at home.”

Many service member debts are protectable under the Service Members Civil Relief Act and therefore must meet complex legal requirements. The best way to minimize the additional risk associated with this highly regulated debtor segment is through proactive due diligence, education and a strong understanding of SCRA.

The SCRA was developed with the intention of helping and protecting military members and their families during times of financial need while deployed on active duty. Recently, the United States Department of Justice made it unequivocally clear that it stands ready to use any tool at its disposal to fully enforce the law when it prosecutes and fines Capital One for violating the SCRA.

Capital One was blamed numerous violations the SCRA from 2006 to 2011. After an investigation, it was found that the company denied service members the guaranteed 6 percent interest rate on credit cards and auto loans and did not provide interest rate benefits, even after receiving requests from service members. In addition, they were found to have foreclosed on homes and confiscated military personnel’s cars without a court order, and received debts on credit cards, mortgage foreclosures and vehicles without filing accurate records of military service.

Capital One has since agreed to pay nearly $7 million in damages and provide a $5 million fund to compensate affected parties who have not received adequate SCRA benefits on their loans to address the issue.

The Office of the Consumer Financial Protection Bureau has also strengthened SCRA Enforcement. in one listed settlement, the country’s top five mortgage servicers and lenders; GMAC, Bank of America, Citi, JPMorgan Chase and Wells Fargo have been forced to help borrowers make loan modifications and compensate homeowners who lost their homes to foreclosures due to SCRA violations. 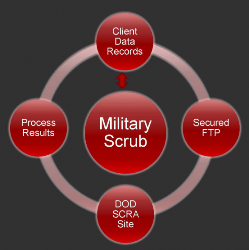 Debt collection has always been a challenging industry, with ‘performance’ being a key metric for success. Today, with the onslaught of state and federal regulations, compliance seems to be the ONLY metric of interest. Active duty members enjoy additional protections under the Civil Assistance Act for Service Members. If a company violates this, there are significant penalties. have a reliable one military scrubbing service can help eliminate the additional costs and regulatory burdens associated with non-compliance with SCRA guidelines.